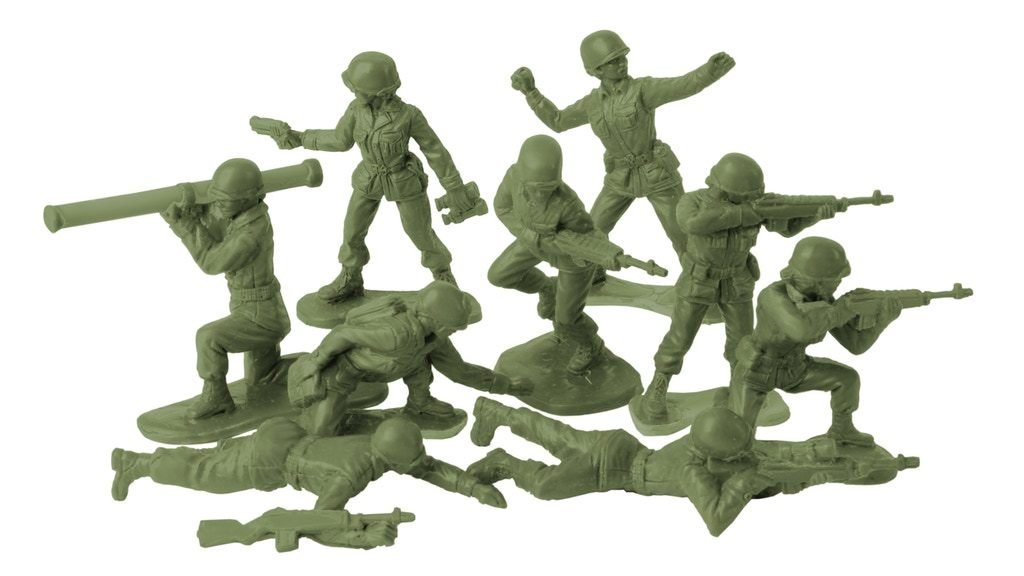 Why doesn't my Shipped Package have Tracking available?

A batch of orders shipped USPS 1st Class Mail on December 7th without tracking numbers. It was a technical error that wasn’t discovered until after the shipment was delivered to the post office with no way to fix the issue.

My package shipped several days ago, where is it?

All the shipping carriers are experiencing unprecedented volumes of holiday packages, and delays are widespread. USPS seems to be the most badly affected with delays of 2 to 3 weeks being common, even for very short distances.

Why didn’t you model these as contemporary 21st Century soldiers?

One of the first steps to create this new set of Plastic Army Women was to research how female soldiers look in real life. I immediately noticed in photos of modern troops that it’s difficult to identify the gender when soldiers are wearing full combat gear, especially the protective tactical vests. I knew once the figures were reduced in size down to a little figure, they would be difficult to identify as women. I also don’t currently stock any 21st Century soldiers, so they wouldn’t fit in well with my current product lineup.

Why don’t you package them along with your plastic Army men?

The simplest version of a plastic figure set is to pack the contents of a plastic injection mold as soon as they come out of the molding machine. I decided early on to keep the product as simple as possible to allow the best chance of getting it to market. Once we get the initial product produced, I’ll be looking at all the different ways the Plastic Army Women figures can be offered, and a playset with men and women plastic soldiers is a possibility.

When will there be Navy, Airforce, Marine and Coastguard Women Soldier figures?

I’ve had lots of requests for this and will be more than happy to develop more set of Military Women figures representing different branches of the US Military. The set of Army Women seemed like the logical place to start that would have the best chance of success. One battle at a time.

Are these really the first ever Plastic Army Women?

Not at all. There were a couple of Army Nurses included in some sets of Plastic Army Men in the 1950’s and some examples here and there in more recent hobby sets. There was also a company in Japan that produced a full set of pink Plastic Army Women wearing high heels in a glamorous pin-up style. As far as I know, this will be the first full set of female toy soldiers figures in the style of classic Little Green Army Men.

Why does it take so long to make them?

There is a surprising amount of work that goes into making a new toy, even one as simple as a set of plastic figures. I’ve budgeted 3 months for the sculptor, 3 months for the plastic injection mold to be made, and 3 months for production. Those are typical timelines, which allow for unanticipated delays (which often occur).

Do the Plastic Army Women have names?

Generally speaking, plastic Army men don’t have names unless they’re specific character figures. Unofficially, we’ve been calling the first pose Loretta, after Navy Chief Yeoman Loretta Perfectus Walsh. She was the first woman to serve in the United States armed forces in a capacity other than as a nurse, and was also a native of Olyphant, Pennsylvania, which is just down the road from Scranton. Loretta was mentioned by a very early supporter of the project. We have names in mind for most of the figures, but I’m not certain how, or if, they’ll be used just yet.

As of April 25th, 2021 new Pre-orders are estimated ship within weeks.

BackerKit is a service that crowdfunded project creators use to keep track of hundreds to tens of thousands of backers—from shipping details, pledge levels, preferences and quantities, whether they have paid or had their card declined, special notes, and everything in between!

The BackerKit software and support team is independent from the campaign’s project team—BackerKit does not handle the actual reward shipping. For more information about the preparation or delivery status of your rewards, please check the project's updates page.

How does BackerKit work?

After the campaign ends, the project creator will send you an email with a unique link to your survey. You can check out a walkthrough of the process here.

I never received my invitation. How do I complete the survey?

The most common reasons for not receiving a survey email is that you may be checking an email inbox different from the email address you used to sign up with Kickstarter, Indiegogo or Tilt Pro account, or it may be caught in your spam filter.

Confirm that the email address you are searching matches the email address tied to your Kickstarter, Indiegogo, or Tilt Pro account. If that doesn’t work, then try checking your spam, junk or promotions folders. You can also search for "backerkit” in your inbox.

To resend the survey to yourself, visit the project page and input the email address associated with your Kickstarter, Indiegogo or Tilt Pro account.

How do I update my shipping address?

When will my order be shipped, charged or locked?

That is handled directly by the project creator. BackerKit functions independently of the project itself, so we do not have control of their physical shipping timeline. If you want to check on the project’s status, we recommend reading over the project's updates page.

I completed the survey, but haven't received my rewards yet. When will they arrive?

As BackerKit does not actually handle any rewards or shipping, the best way to stay updated on the shipping timeline would be to check out the project's updates page.